Skip to content
Home >> Blog & Stories >> Stories >> Women Do 2.6 Times More Domestic Work Than Men. Here’s a Look Inside 10 of Their Kitchens.

Women Do 2.6 Times More Domestic Work Than Men. Here’s a Look Inside 10 of Their Kitchens. Imagine cooking a meal without running water, electricity or even a countertop.

Most of us wouldn’t know where to begin. And yet, millions of women around the world do it every day. In fact, women do 2.6 times more domestic work than men do, overcoming these obstacles and more to feed themselves and their families. They have to…putting food on the table rests squarely on their shoulders.

From Sudan and Syria to El Salvador and Ecuador, mothers are baking bread, simmering soups and stewing apples. These photos are a testament to their ingenuity, perseverance and unwavering devotion to provide for their children. 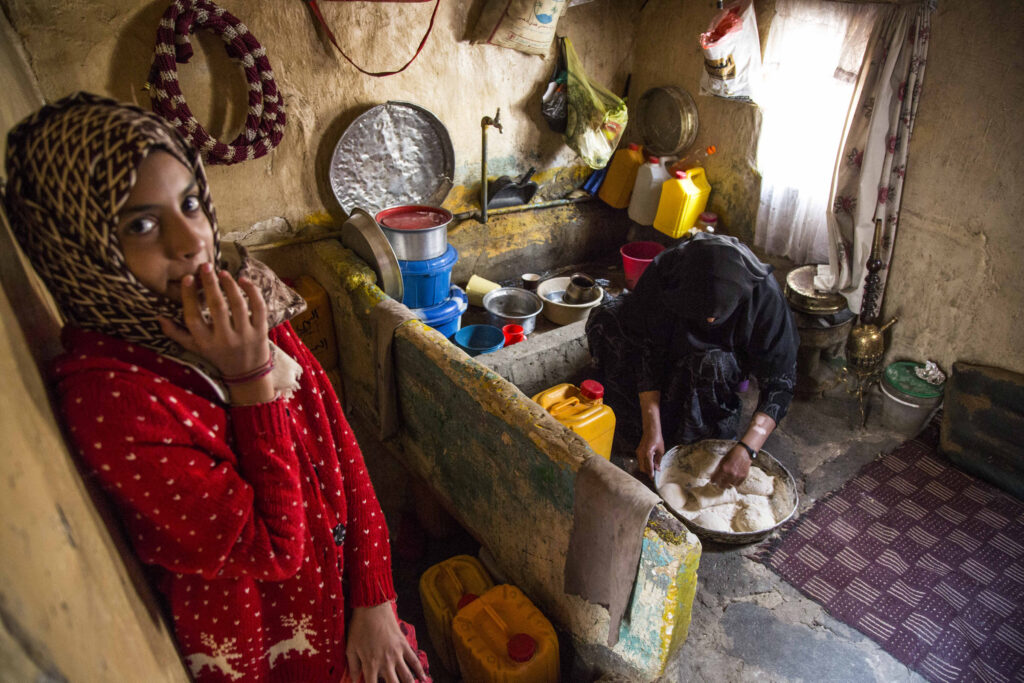 Layan (left) and her mother Roudha prepare the family meal in Yemen, which is entering its 5th year of conflict. A few months after the start of the war, the family’s home was destroyed by an airstrike, so they were forced to move. Roudha’s husband hasn’t been able to find work since then, but a few pots and pans, cooking oil and flour from WFP allow them to bake quick breads in a stone oven. 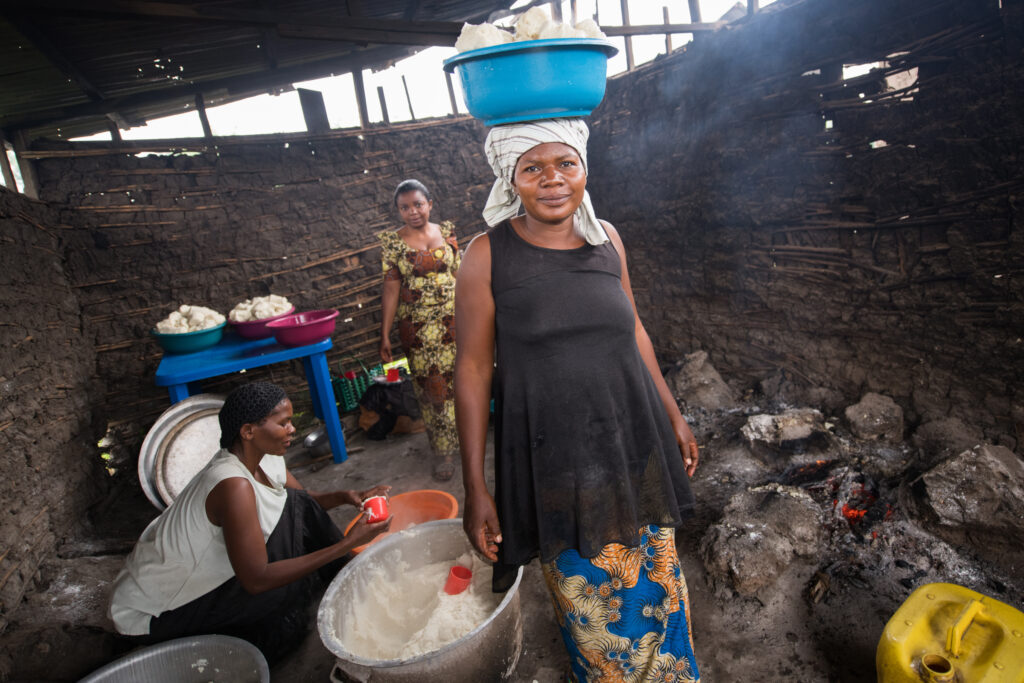 Three women in the Democratic Republic Congo (DRC) prepare meals for a school full of children. Large rocks arranged in a circle on the ground form the fire pit, and a blue plastic table is the main food preparation area. The angled, open roof allows light to come in and smoke to escape. Over 60% of the people WFP serves in the DRC are women. 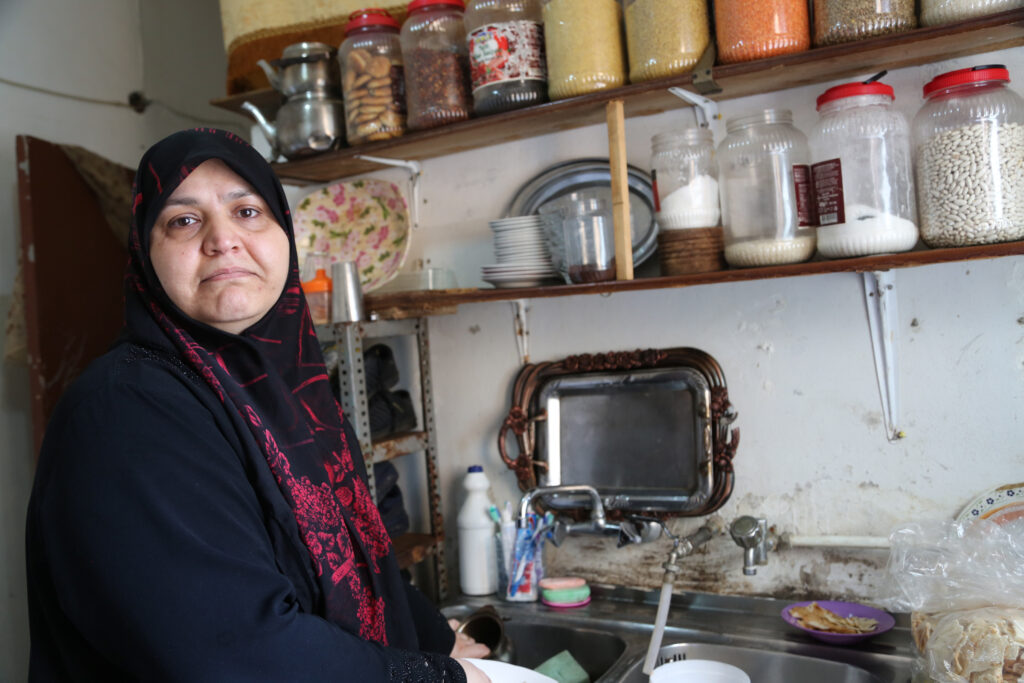 Ibtisam is a Syrian refugee living in Lebanon. She’s a single mother of nine children caught in a vicious cycle of poverty and debt. Her eldest teenage daughter works 13 hours a day to help support the family. The only assistance Ibtisam gets is a debit card from WFP that she uses to buy food for the family, some of which is shown here on her kitchen shelves. 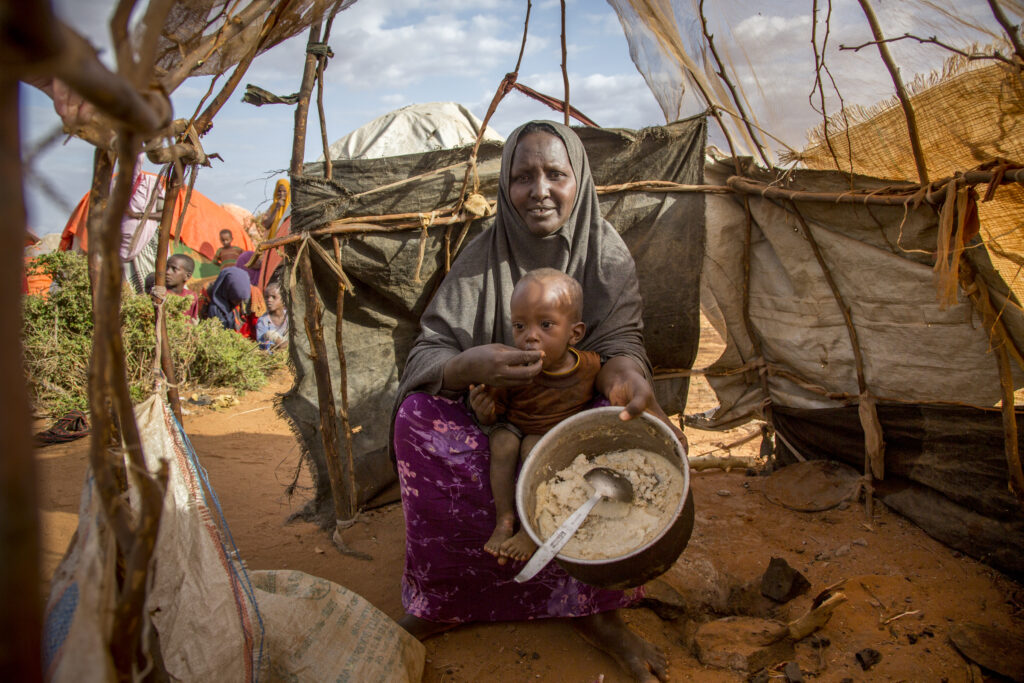 30-year-old Sacdiya Mohamed Noor makes a meal for her one-year-old son at a Somalian refugee camp. This makeshift tent is her kitchen – little more than some branches and discarded sheets of plastic tied together around the joints. Sacdiya and her children were forced to leave their home due to severe drought. With assistance from WFP, they were able to observe Ramadan with the little food they have. 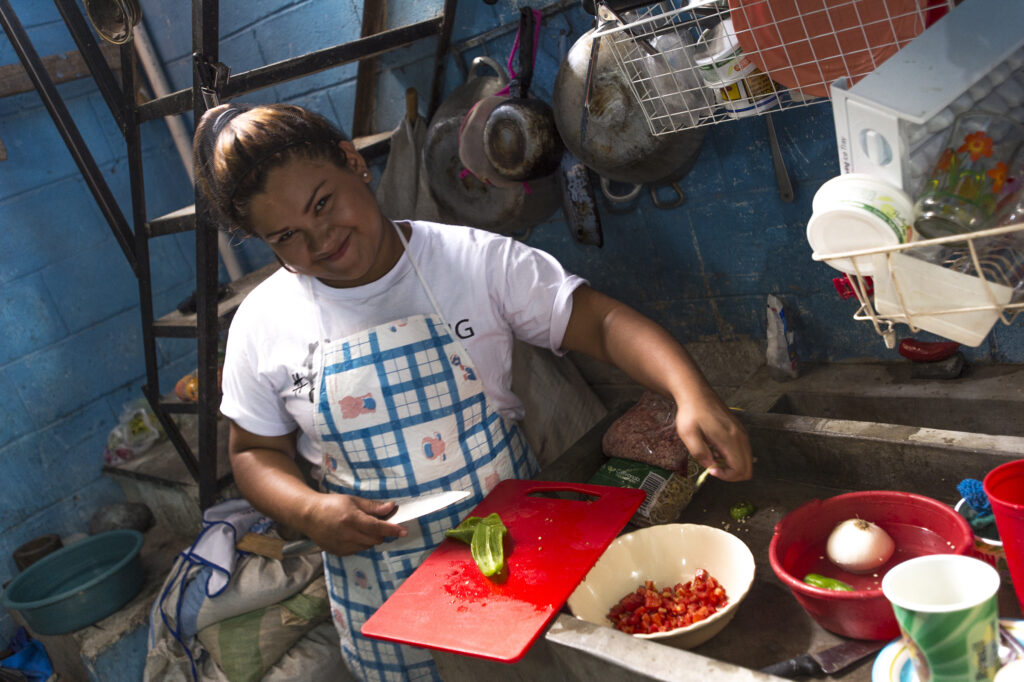 In El Salvador, Virginia Molina is lucky to have running water in her kitchen. She’s one of the few women from her community who finished high school, and her biggest dream is to become a psychologist. Right now though, she must work to help support her family, including making meals with ingredients she purchased using her WFP food voucher. 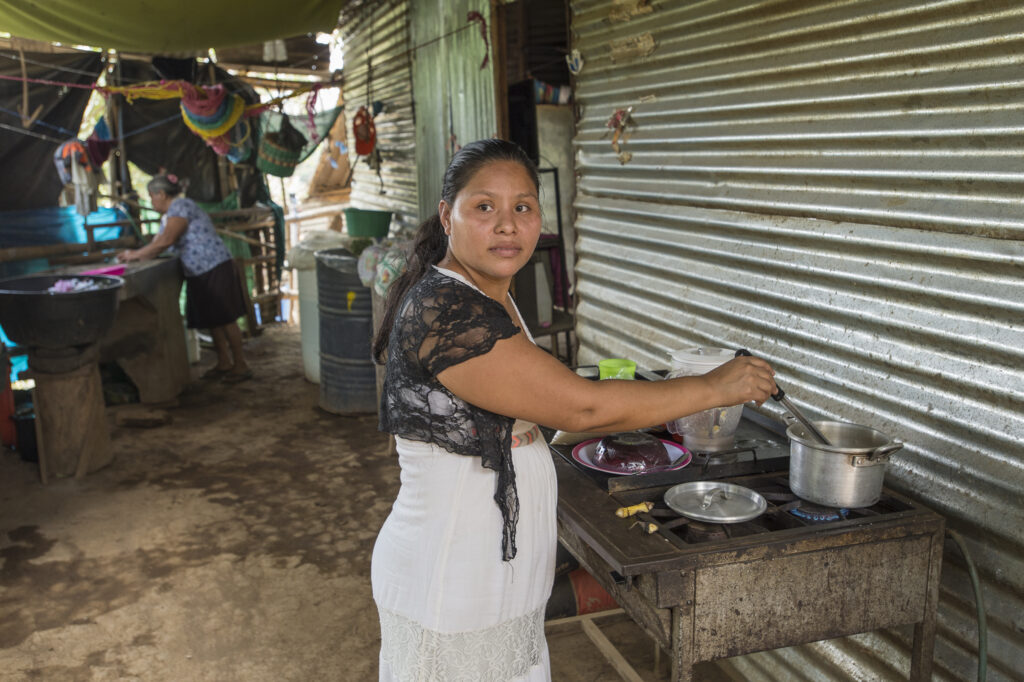 In an outdoor kitchen, Rina Perez prepares fortified cereal for her six-month-old son, Brandon, on a gas-powered stovetop. Rina buys the cereal with a voucher she receives from WFP. The voucher program targets pregnant and nursing mothers and children under two. So far, WFP has distributed vouchers to more than 29,000 families in El Salvador. 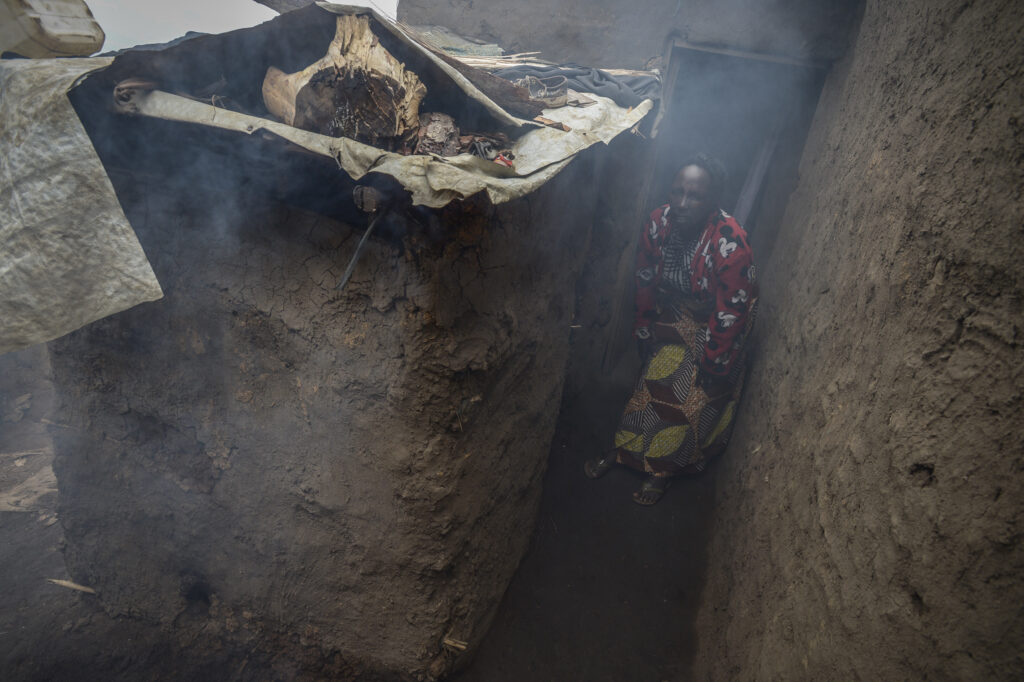 When militia men forced them from their home in the DRC, Venancie Muhimpundo and her three children spent three weeks hiding from them in the brush. Her husband was killed trying to defend their farm, and a truck driver brought them safely to Rwanda. Here, at a refugee camp, Venancie is about to enter her kitchen – a small, windowless, smoke-filled room that is common throughout the region. She relies on WFP to provide the food she and her children need. 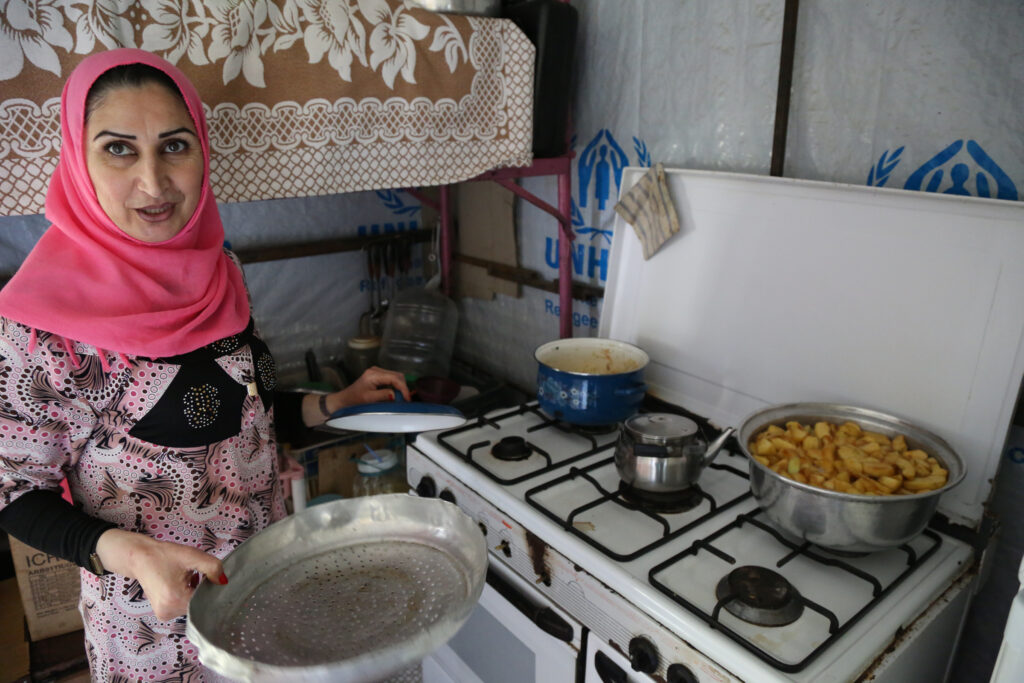 In her pink scarf, Um Mohamed cooks WFP-provided rice and stews apple slices in sugar syrup for her family to eat at a Syrian refugee camp. Camp management built her kitchen by using free space in front of her tent to create an extra room by welding metal bars together and using plastic sheets as walls. 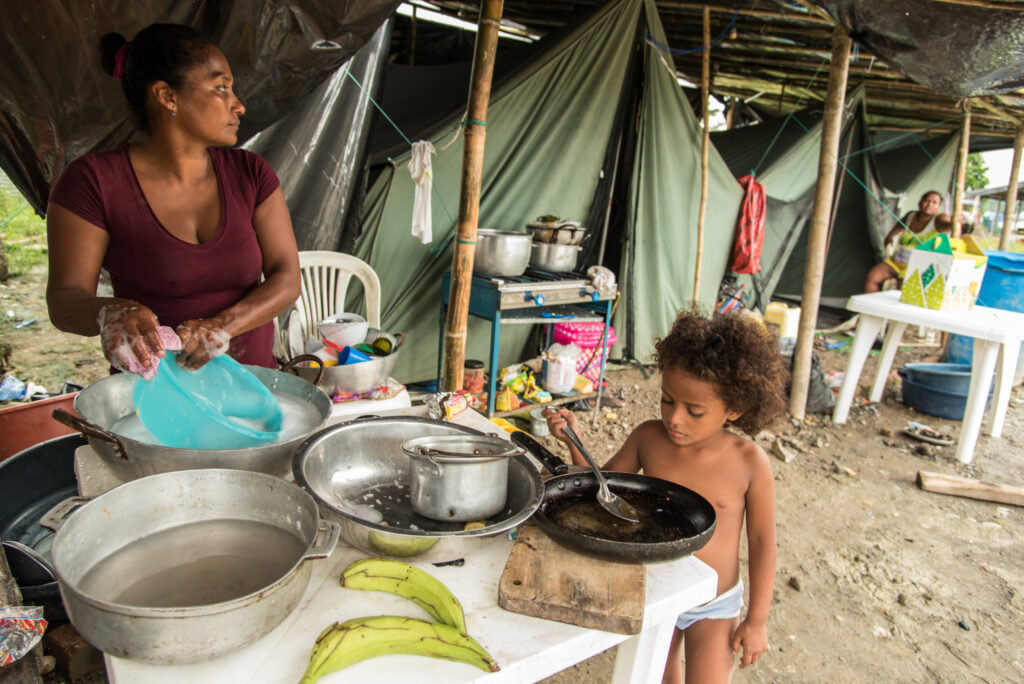 Natural disasters strike without warning. The 7.8-magnitude earthquake that struck Ecuador in 2016 killed more than 650 people, injured more than 7,000, and left 500,000 in need of humanitarian assistance. Rosa Mariluz and her children lost everything, which is when WFP stepped in. Here, she cleans up after a meal in her post-earthquake kitchen – a small white table with one pan for washing and another for rinsing. 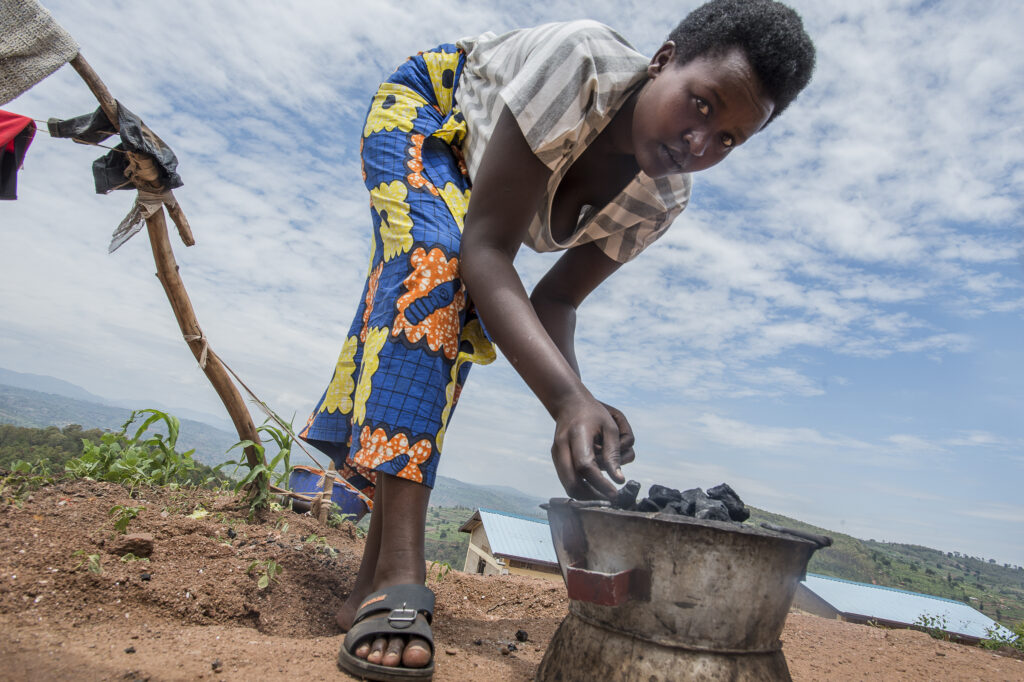 Every month, WFP provides food to over 8,000 refugees in the Mugombwa camp in Rwanda. In 2014, Angelique, her husband and their two children fled there from violence in the DRC. “It was terrible to see my kids hungry and injured,” she says. “I cried all the way to Rwanda, because I felt that I was in a hopeless situation.” Today they rely on this small grill and WFP Super Cereal to feed their newborn baby girl, who they named Peace.

Every day, WFP serves millions of women in more than 80 countries. Sometimes this assistance comes in the form of ready-to-eat food, other times it’s by building a kitchen or providing a cash voucher. No matter how daunting or dangerous the situation may be, WFP does whatever it takes to reach those who need it most.

If you want to help women and girls get the food they need, donate today.

Special Interests:Extreme Poverty,Women
Share this story
<< Read the previous story: Fleeing Idlib: "One of The Most Dangerous Trips a Person Could Make"
Read the next story: An Aid Worker's Firsthand Account of the Crisis in Syria: "No one would do such a thing" >>

You Asked, We Answered: How Is WFP Helping Mothers and Babies During the Coronavirus Pandemic? These Girls Started out Orphans or in Urban Slums. Now They're Becoming Community Leaders.
Explore About Us WFP's Work U.S. Policy Blog Podcast
Get Involved Start a Fundraiser Be a ZeroHunger Hero SharetheMeal App Corporate Partnerships Foundations
Donate
It looks like you're outside of the United States.