Ethiopia has a little-known distinction. It is the second largest host of refugees in Africa, only trailing Uganda. More than half are from South Sudan, where three years of war have displaced millions from their homes.

“After fleeing conflict and deprivation in their home countries, refugees deserve to be protected and supported,” said Samir Wanmali, WFP’s Acting Country Director in Ethiopia.

This responsibility comes as Ethiopia suffers the consequences of a changing climate. Rains have failed for the third consecutive year in the lowland and pastoral areas of the south and southeast. The drought has driven millions of people into hunger, creating a food security emergency that is forcing many to do what they can to survive.

Many farmers have sold off their livestock at low prices, leaving them with no way to make a living. Meanwhile, internal violence last year displaced some one million Ethiopians along the border regions of Oromia as well as Somali, the epicenter of the drought.

“These are families like yours and mine, our brothers and sisters, and the world must help them now – not later,” said WFP Executive Director David Beasley. “Please help us do the job these people need us to do.”

WFP is providing assistance to millions of people in Ethiopia through programs including emergency food distribution, school meals, and resilience building activities. But insufficient funding means refugees in camps may only receive one meal’s worth of support starting this month.

The humanitarian agency expects that roughly eight million people will require food assistance this year, and more than two million children and nursing mothers are malnourished–requiring specialized nutritious foods. Through September, WFP will provide nutrition services to 1.5 million children under the age of five as well as pregnant and nursing mothers in areas where the risk of malnutrition is the highest.

WFP is also assisting approximately 670,000 refugees in 26 camps along the borders of the country. Half– over 350,000– are South Sudanese, and new camps are being opened to accommodate refugees also coming from Eritrea, Sudan and Somalia. Recent assessments show that malnutrition rates among children under the age of five are above the emergency threshold of 15 percent in nearly half of the 26 camps. 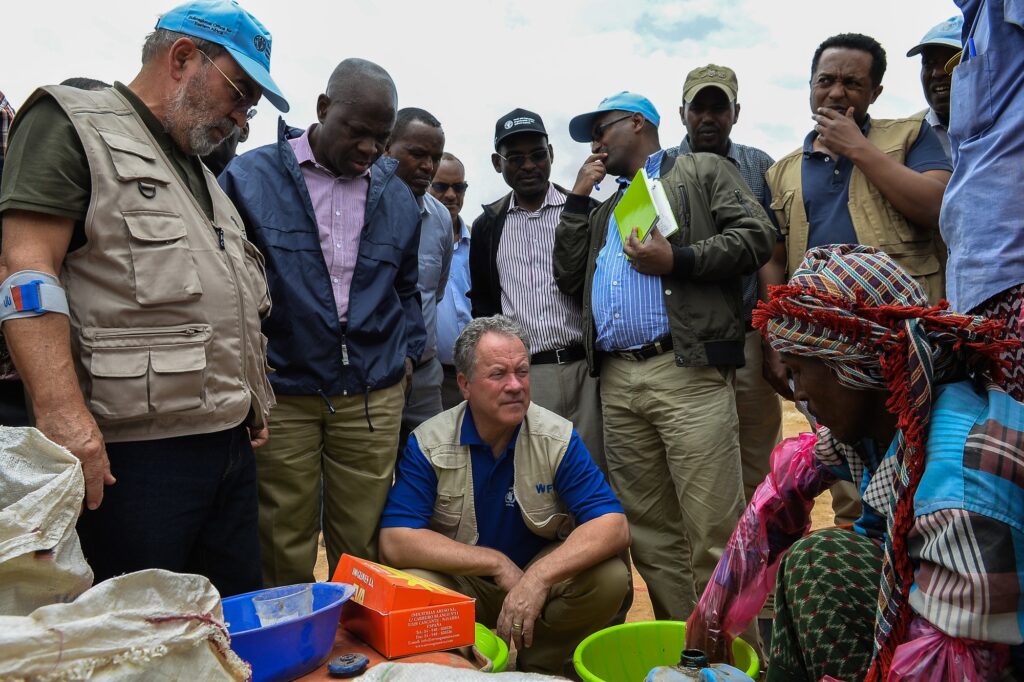 Last fall, WFP Executive Director David Beasley joined other heads of U.N. Rome-based agencies to see the impact of drought in Ethiopia and call for support.

Due to lack of funds, refugees have not received full food rations since late 2015. This month, ration cuts are expected to increase from 20 to 40 percent. As a result, the amount of food assistance would drop to what is effectively one meal a day.

Last fall, WFP Executive Director David Beasley joined other heads of U.N. Rome-based agencies to see the impact of drought in Ethiopia and call for support.“We have a shared responsibility to leave no one behind,” Wanmali said. “Should we neglect this, we risk further destitution and marginalization of some of the world’s most vulnerable people.” Food Stocks and Medical Supplies: How WFP Is Rising to the Challenge of COVID-19 The Aftermath of Drought: They Used to Eat Three Meals a Day, Now They Only Eat One
Explore About Us WFP's Work U.S. Policy Blog Podcast
Get Involved Start a Fundraiser Be a ZeroHunger Hero SharetheMeal App Corporate Partnerships Foundations
Donate
It looks like you're outside of the United States.